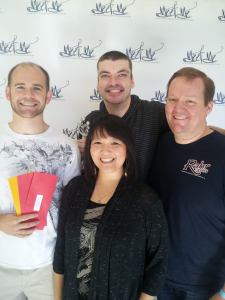 I’ve had a few days to recover from lost luggage and broken cars to finally reflect on the weekend in St. Louis.  It was our first time there and we had a great time!

I believe this was Katie Hicks and Crystal Auclair’s first time as event directors at this event, and they did a great job.  I think it really helps to have long time competitors as event directors – there are just certain little nuances that you are probably more aware of because you’ve been there so many time before.  Like having plenty of space for private lessons and for dance practice.  I thought the event was run well, and took advantage of the idancemobile app to keep dancers on top of any scheduling changes.

I enjoyed the pro staff that was there – I even got to dance with a couple that I had never danced with before this time! I really liked that there was plenty of down time for lunch and dinner.  Granted this is a smaller event with fewer comps, but I thought it was scheduled well.  The hotel was very nice and the hotel restaurant had good food that wasn’t too crazy expensive.  I do wish that there were more food options outside of the hotel within walking distance, but that is a minor complaint.  Being close the airport with a free shuttle is a big plus as well!

This is definitely an event that we will plan to return to in the future.  Great job, Katie and Crystal! 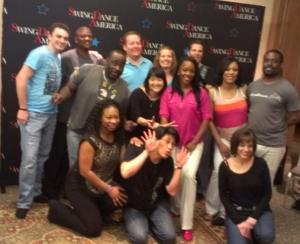 Next in our dance marathon trifecta was Swing Dance America at the beautiful Lake Geneva Resort in Wisconsin. It had been 4 years since we last attended, with lots of fond memories. We weren’t really sure what to expect this time, but since we were traveling with Chip and Janice, and we knew we’d get to see alot of our dance friends, we were pretty excited!

After a super early flight into Chicago, we all rent a car and drive the 90 minutes to Lake Geneva. It was just cheaper for us to do this option then to fly into Milwaukee and then take the shuttle in. Plus, we knew that this was an event that we would want a car to drive to the grocery store and for some amazing Wisconsin pizza! All that delicious Wisconsin cheese!

The resort is really nice, but difficult for dancers sometimes, since it’s laid out with multiple connected buildings. Our hotel room ended being pretty much as far away from the ballroom as one could get, with lots of stairs to negotiate. With ProAm Routines, Rising Star and Masters Routines, all in the same night, back to back to back, Chip and I were really worried about how we were going to do costume changes. His is easier of course – mine involves a change into a full corset!

So Friday, we get there, and we run into one of our favorite people, Barry Jones. He has been so encouraging and a great cheerleader for us. After chatting with him a bit, he asks me to be his assistant in his two workshops over the weekend! WOW! Naturally, I had to jump on that opportunity, even though that meant missing out on a trip to the pizza place and less sleep. I didn’t care. Working with Barry is so amazing and I was so honored that he wanted me to assist him! The two workshops were so fun – and there were several people who called me the “lady that teaches with Barry” later in the weekend. Heh. So great! Thank you, Barry!

The only competition we had going on that night was our Advanced/All Star strictly swing – which Trent and I decide to go ahead and dance together. We like to do that when we are traveling, while we tend to find different partners when we dance locally to change things up. We had sizzling prelim dances, which got us a lot of compliments. SO sweet! And then we made it into finals, which we were thrilled about. After all, we are virtually unknown in that region since we had not been in such a long time. It was GREAT to be noticed. I think we ended up in 7th or 8th, which amongst that crowd, I could not really complain too much.

Saturday was a long long long long day. Floor tryouts at 7:30am with both Matthew and Chip, followed by teaching with Barry at 9am and a judging seminar that he asked me to attend as well. The workshop was fun, although since it was an advanced level workshop at 9am, we did not have very many people. I did however, get to meet Clayton, who was kind enough to let me borrow his room for my costume change as he was actually very close to the ballroom! Thanks again, Clayton!

There were 2 judging workshops, but I only attended the first. I was desperate for food! But the one I attended was a seminar on how the relative scoring system came about and how and why it works. They had some technical difficulties with the AV equipment, but I thought the seminar was really good. I have a pretty good understanding of how it works, but it was the first time I heard how it came to be and why it is the best system for judging our type of competition. We also were given handouts with everything that was talked about, as well as examples for us to really see how things work. I thought this was a valuable workshop that any competitor should check out.

Comps started early on Saturday, since there were SO many events to get through! I think proams started at noonish – with 3 levels of Ams in both Swing and Hustle. Then all the hustle strictlies and most of the swing strictly prelims (all levels other than the Adv strictly from the night before). Then 3 levels each of hustle and swing J&J. Not to mention, all the routine divisions except for showcase, which was on Friday. So Proams, Rising Star, Masters, Classic and then Teams. And finally Champions Strictly. It was a LOT to get through in one day.

I heard that there were issues, but don’t know what they were. Things seemed disorganized and every category ran late. One of the biggest issues, we felt was also the use of “blocked time” on the schedule. For instance, on Saturday with the routines, it just says 8pm: Pro-Am Solo Routines, Rising Star Routines, Master’s Routines, Hustle Routines, Open Classic Dvision. I understand that it’s hard to know how many couples you may have in any given division, but those people in the Classic division, for instance, still had to show up early since they didn’t know when they might be starting. I felt really bad for the Classic couples – at least my 2 divisions were the first two. But there were many of them already in costume standing the ballroom, waiting through 12 proam routines, 6 rising star, and 4 masters routines. Since it said that routine divisions started at 8, many of us were down there by 7:30pm, but then routines didn’t start until closer to 9. by the time the classic division was run, many of those couples had been down there for 2 hours, just standing or sitting. I felt that it made for a few lacklaster routines. Not that they were bad by any means, but you could just feel a little less energy. Not just in the competitors but in the audience as well.

I hope that this issue is resolved in the future. This was the biggest issue – otherwise, we thought the event was pretty fun and entertaining. It made me sad that we had to miss awards. We specifically booked the latest flight we could find so that we could stay for the awards as scheduled. But since they ran so late, we had to leave. We found out on our drive to the airport, that me and Chip won 1st in the Rising Star and that Trent won first in All Star JJ. It would have been nice to be there for people to see our faces and associate us with these prizes. Oh well. Maybe next time!

As I said, this is a fun event ( I even got to try out my baby hustle skills!) with tons of really good dancers and some interesting comps and seminars. But the disorganization and the lack of communication with the competitors was a sore spot for many of us.

We’ll be back, because we enjoy the event. Hopefully the issues this year were the exception.